Frank Lloyd Wright may be one of the first really famous architects.  Even those unfamiliar with architecture will likely recognize his name.  Part of this is because he recognized the power of the media.  He took advantage of the medium to promote his ideas and work by appearing on television interviews and even being a guest on the classic game show What’s My Line?  Much of modern architecture can be traced back to Wright’s innovative work.  In honor of his 150th birthday which would have been this year we’re taking a look at the man and his work. 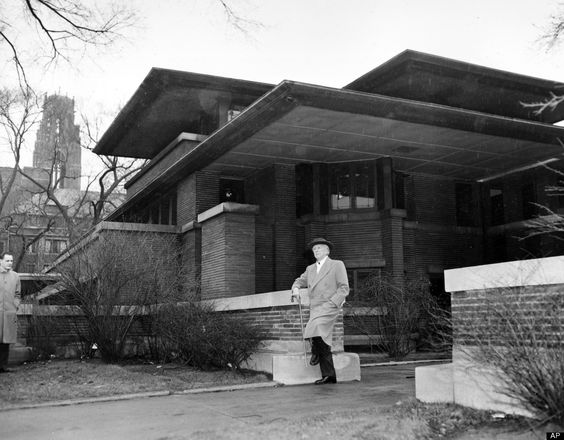 Born June 8, 1867 Frank Lloyd Wright designed more than 1,000 structures in his lifetime.  Over half of them (532) were completed.  The last project before his death in April 1959 is also one of his most recognizable.  The building for the Solomon R. Guggenheim Museum in New York City kept him busy for sixteen years.  The final form of the building is a large beige spiral that emerges from its Fifth Avenue location.  Its unique central geometry was meant to allow visitors to easily experience Guggenheim’s collection of nonobjective geometric paintings by taking an elevator to the top level and then walking down the slowly descending central spiral ramp to view the artworks.  The floor of the ramp was to be embedded with circular shapes and triangular light fixtures to complement the geometric nature of the structure.  The building itself is as much a work of art as that which is housed within it. 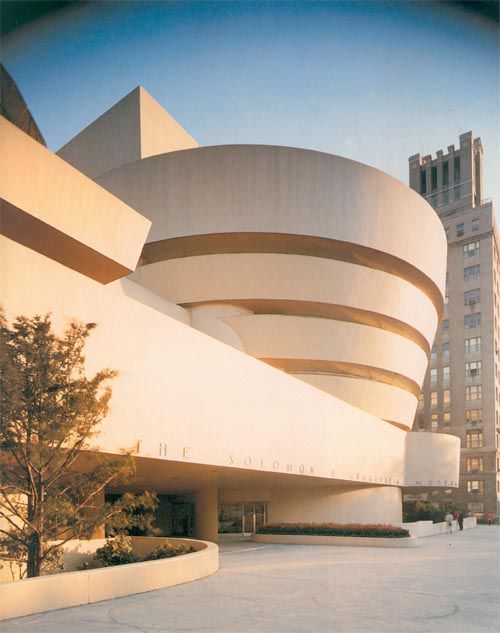 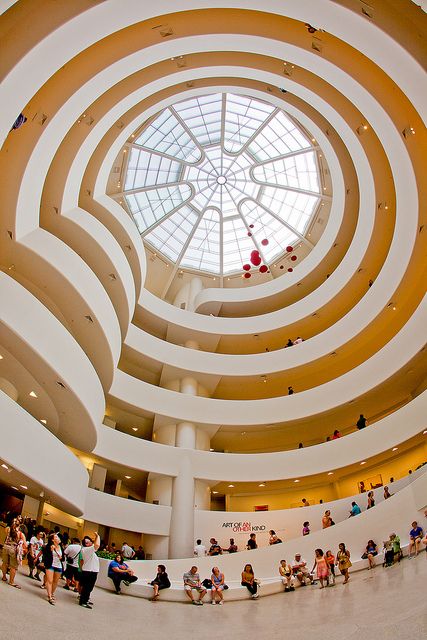 In the early 1900s Frank Lloyd Wright pioneered the Prairie Style of architecture.  Prairie style houses often feature one or two stories with one story projections, low-pitched roofs with broad overhanging eaves, a prominent central chimney, an open floor plan, strong horizontal lines, and a wide use of natural materials, usually wood or stone.  Inside Prairie Style homes Wright used themed, coordinated design elements that were repeated in windows, carpets, and other fittings.  By the 1930s Wright’s designs had matured into the Organic Style.  The peak of his Organic Style and one of his most famous residences was Fallingwater in Pennsylvania.  Constructed over a waterfall the house features a series of cantilevered balconies and terraces.  Fallingwater perfectly captures Wright’s aim to design structures that created harmony between humanity and the environment. 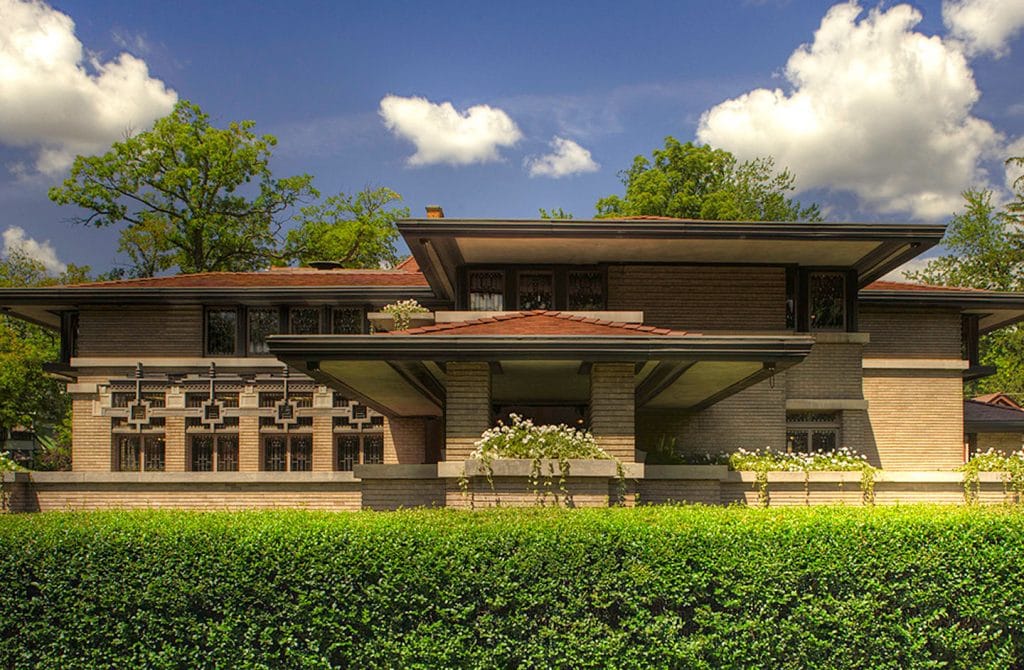 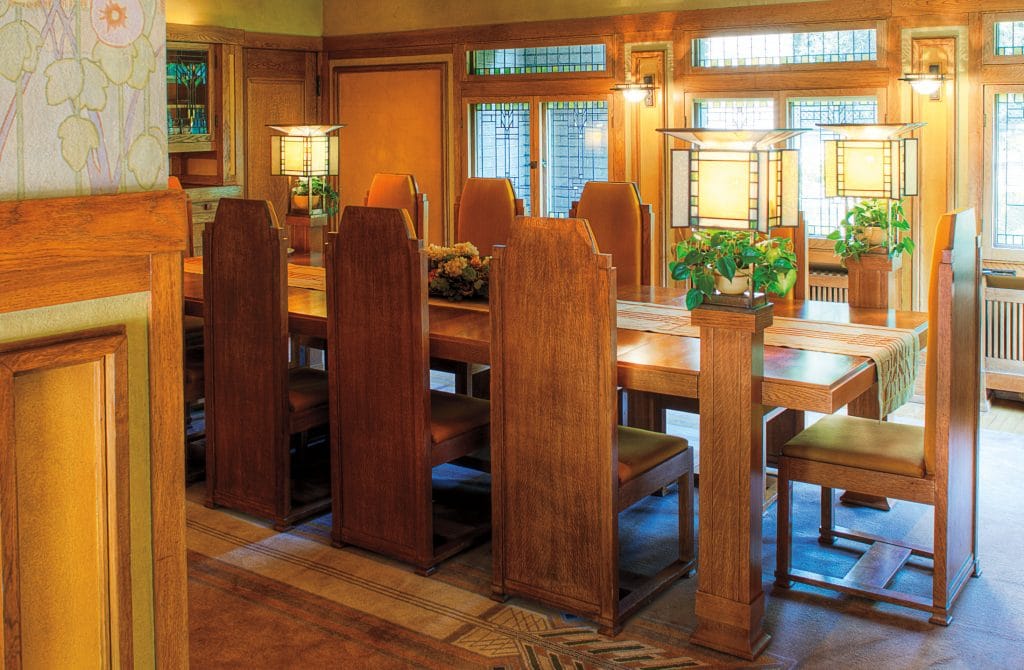 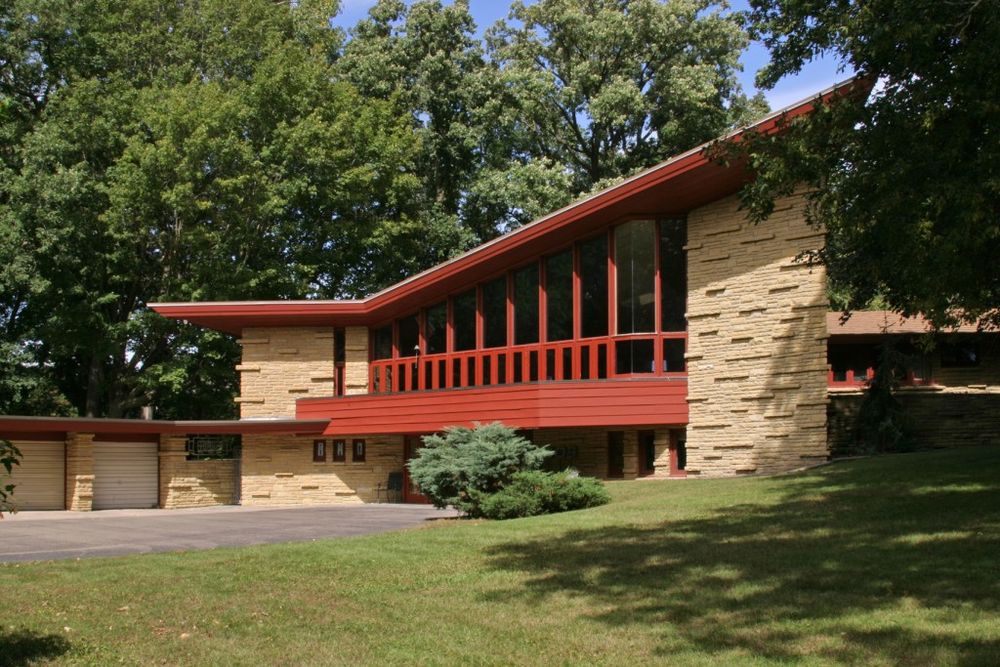 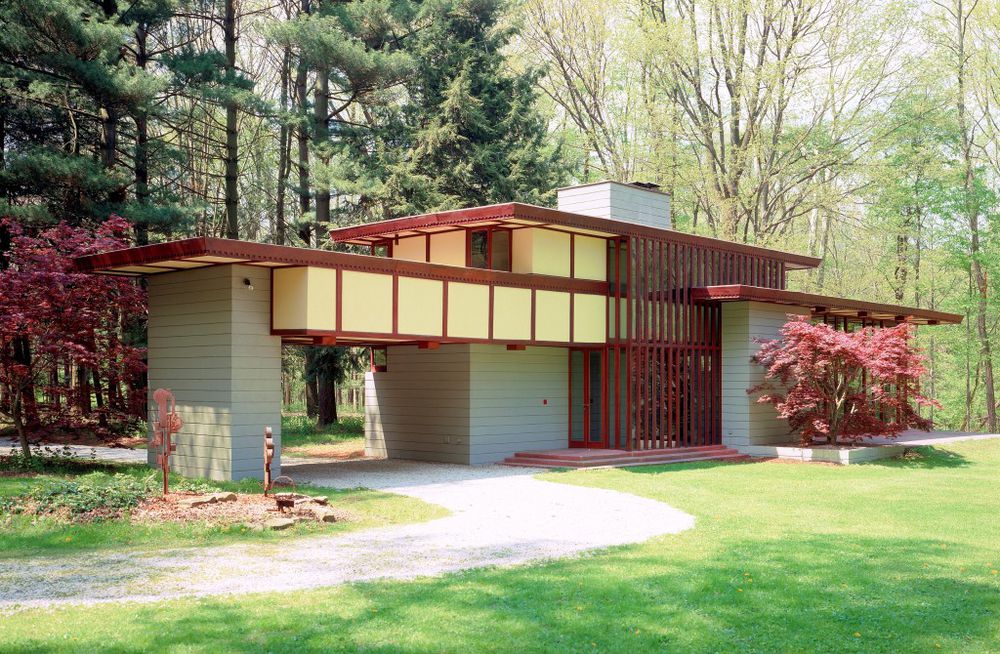 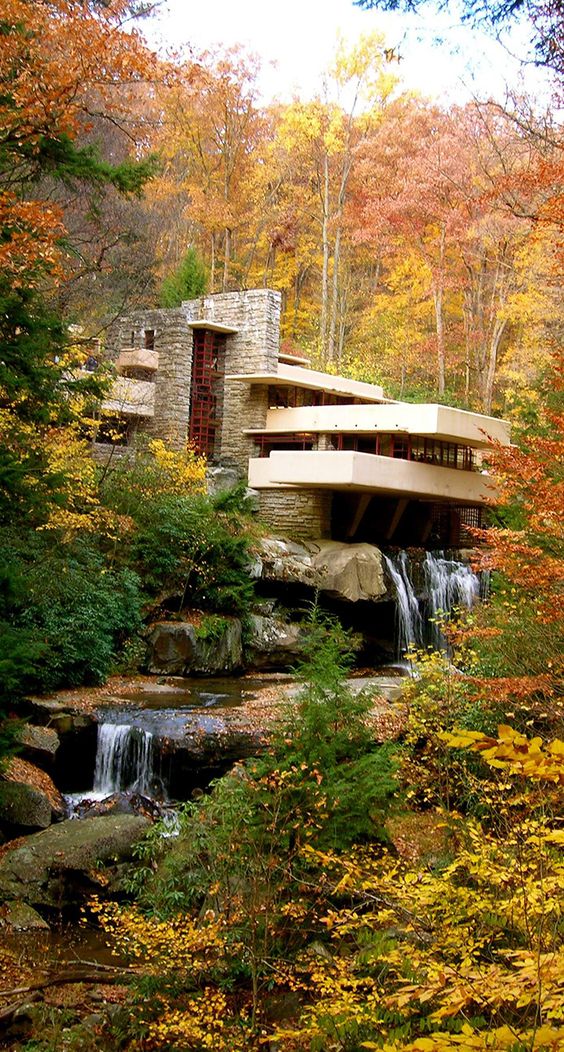 Part of what made Frank Lloyd Wright so relevant was that he readily embraced change and experimented with new materials.  He made innovative use of new building materials like precast concrete blocks, glass bricks, and zinc cames for leadlight windows.  He was also one of the first architects to design and install custom-made electric light fittings.  Glass became a major element in Wright’s designs because it fit well into the philosophy of organic architecture.  Glass allows you to view and interact with the outdoors while still being protected from the elements.  Wright even compared glass to lakes, rivers, and ponds which he called the mirrors of nature.  He would string panes of glass along walls to create light screens to join together solid walls.  The large amount of glass helped create a balance between the light and airiness of glass and the solid, hard walls. 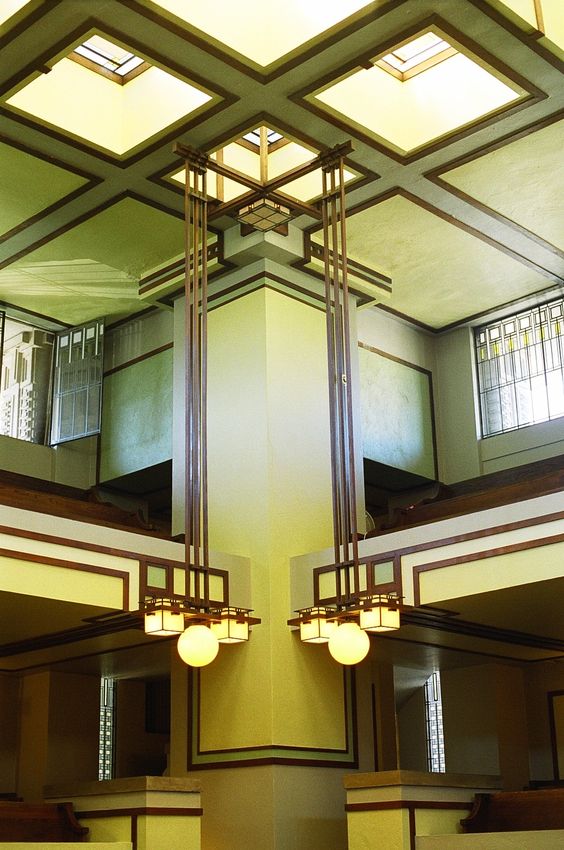 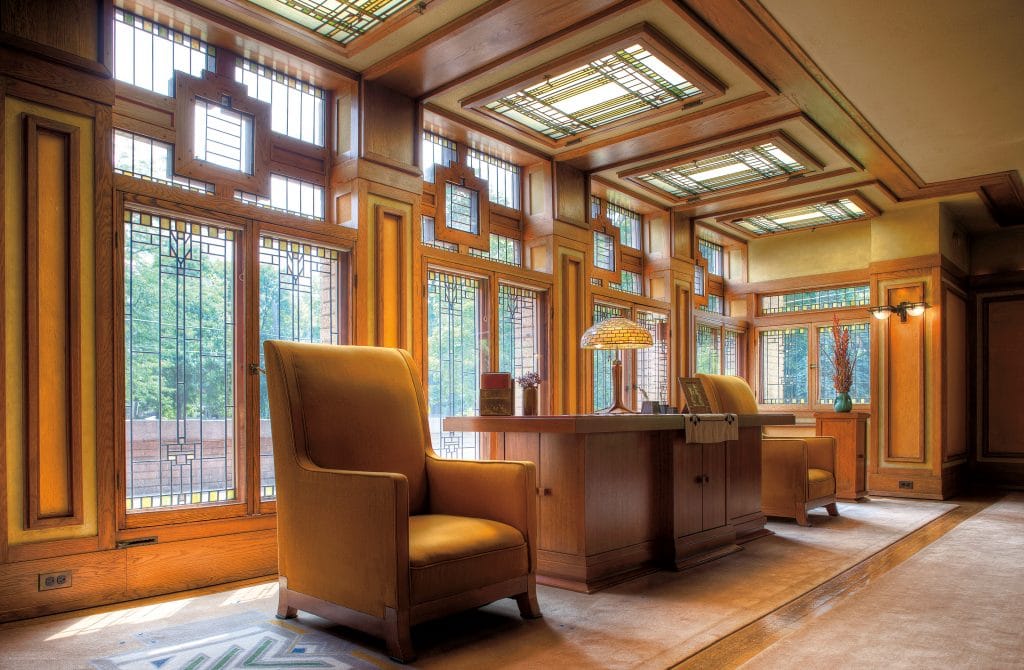 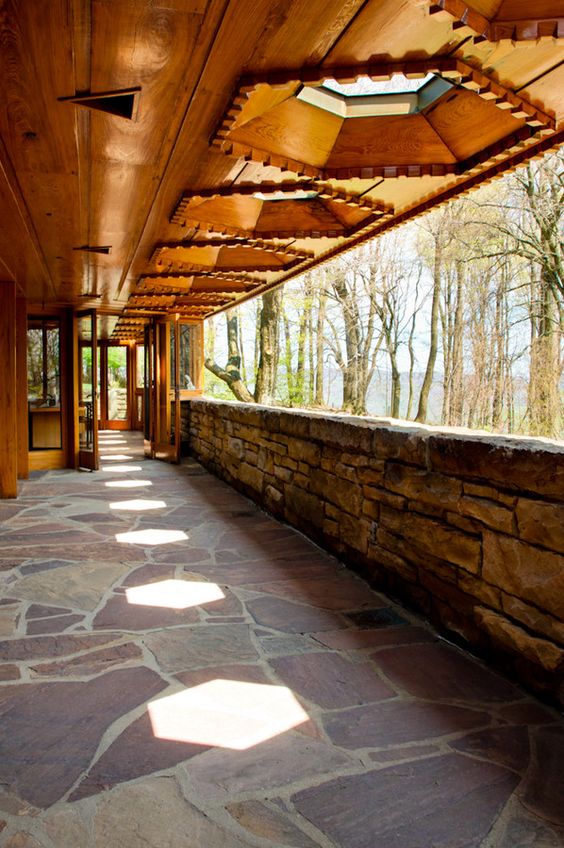 Wright strove to elevate American society through architecture.  He said that his work always aimed to serve the client’s needs.  He wanted to provide affordable, individualized homes for middle-class Americans that would be both functional and elegant.  Wright was determined to create a style of architecture that drew on the diversity of American culture and would come to be seen as natural to the country.  The Prairie Style broke away from more compartmentalized rooms and focused on a more open concept.  If you enjoy your open floor plan home, you should take a moment to thank Frank Lloyd Wright.